Our Night Sleeping Rough for Simon on the Streets

News & Media Our Night Sleeping Rough for Simon on the Streets

Our Night Sleeping Rough for Simon on the Streets

On Thursday 23rd April we joined Simon on the Streets at the Stadium, along with various other local businesses to sleep rough to help raise awareness and money for the charity.

Simon on the Streets is an independent charity that helps and supports those who are sleeping rough or are in danger of doing so. Sleeping rough is not just a case of not having a home, it stems from many other problems including; drugs, alcohol, childhood problems and social, mental and behavioural issues.

The team at Simon on the Streets are non-government funded, which gives them the flexibility to work with their service users on a more individual level. The team operate weekly soup runs, street outreach work and individual intensive support. This level of support means that the team can work at the pace of each individual service user to help them make positive changes in their lives.

The purpose of the Sleep Out is not to replicate sleeping rough, that is not something that could be recreated overnight, instead it is to raise money and awareness of the charity and the incredible service that they provide.

We made our way to the cold concrete of the Stadium concourse where the Sleep Out was taking place. It was a pleasantly warm night, having been one of the hottest days of the year. Armed with our sleeping bags, cardboard boxes, plastic sheets and plenty of layers, we were prepared for whatever the night might bring.

The night started with entertainment by local folk pop band Man in the Street and magic tricks from the charming Matthew J, before moving on to a presentation by Helen Beachall, General Manager, Simon on the Streets. During the presentation we were introduced to ex service users Pixie and Jamie, who spoke about their own personal experiences and what lead them to sleeping rough. They also explained how Simon on the Streets helped them to turn their lives around and find the motivation they needed to make positive change. Pixie and Jamie both now work for Simon on the Streets, clearly moved by the experiences they had and wanting to give back to the fantastic cause that gave them a new life.

After the presentation we all began to bed down for the night. The reality of sleeping rough was setting in, with many of us being kept awake by creepy crawlies and the light summer evening, but we knew that these worries were so insignificant compared to what those who actually sleep out on the streets have to deal with on a nightly basis. We were not afraid of getting attacked by drunks or kept awake by the thought that we could wake up to all of our possessions having had been stolen. We soon realised how lucky we are and how much we take for granted in life.

Woken by the 5:30am sun rise, stiff and tired from the uncomfortable nights sleep, we all gathered for our bacon sandwiches before going on to work and our normal lives.

For the homeless that is their life. With the help of donations Simon on the Street can work towards changing this by helping the homeless to get off the street and make the positive changes they need to start a better life.

If you would still like to make a donation it’s not too late, please send your support to www.justgiving.com/johnsmithsstadium

You can also check out Simon on the Streets webpage here for more information on what they do and any upcoming events that you can get involved in! 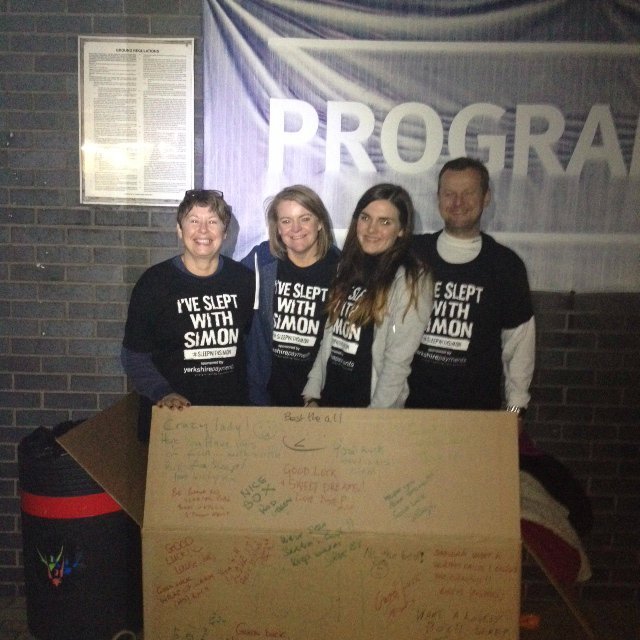