Former WBC World Heavy Weight Champion, Frank Bruno, will be holding An Evening With… at the John Smith’s Stadium on Friday 13th February.

Iconised as one of Britain’s most popular fighters, Bruno claimed his title of Heavyweight Champion at Wembley Stadium in September, 1995, after beating the 1994 victor Oliver McCall.

The evening will be raising funds for The Leanne Baker Trust, founded by Meltham-born artist Darren Baker, which supports those suffering from mental illness and depression.

Event organiser Jame Beatiie, of See It Now Sports, said it was because of Bruno’s bipolar disorder that he chose to support this charity, as he knew it was a cause close to his heart.

“We felt like it was a good opportunity to raise awareness of mental health issues, which can often be a taboo subject to talk about. I have spoken to Frank and he is excited to speak of the highs and lows of his life.”

James has also revealed that there will be some special items to be auctioned on the night by himself and Frank – as well as a special guest of two!

One fan and special guest who can’t wait to meet the boxer is namesake ‘Bruno’ – Giants star Michael Lawrence.
Lawrence, who is nicknamed ‘Bruno’ due to his resemblance of the famous boxer, will be in attendance on the night alongside some of his team mates and officials from the Giants.

Pictured to the left (from left to right) are Michael Lawrence of the Huddersfield Giants RL, Rock Café owner Richard Downey, event organiser James Beattie and evening sponsor Sally Willis of Fantastic Media at the launch of An Evening With Frank Bruno Dinner. Image Credit: The Huddersfield Examiner http://bit.ly/1tubBDI 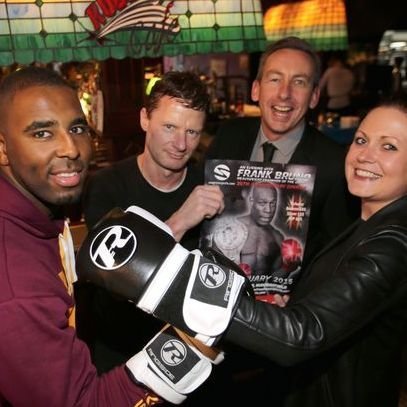