On Thursday 21st April, The John Smith’s Stadium will be playing host to Huddersfield’s second sponsored sleep out, in aid of homeless charity Simon on the Streets.

‘Sleep with Simon’ is the flagship fundraiser for West Yorkshire charity Simon on the Streets. Simon on the Streets provides outreach support all year round to vulnerable adults who are rough sleeping or at risk of rough sleeping in Huddersfield, Bradford and Leeds. Whilst the sleep out can never give a true representation of what it is like to sleep rough, without the context of tragic and harmful lives that simply isn’t possible, what it does hope to do is to challenge people to question their own understanding of rough sleepers and to gain insight. The sleep out has been running in Leeds for around 6 years, and returns to Huddersfield and the John Smith’s Stadium in 2016 for the second time. Last year’s event saw around 40 participants raise over £6000, a huge achievement for a first time out and the independent charity hopes that this year the event will be even bigger and raise more of the vital funds they need to continue their work.

To show our support, three of our amazing members of staff have volunteered to take part and sleep out on the Stadium concourse, to help raise money for this fantastic cause. They will be spending one whole night sleeping out on the concrete with just a sleeping bag and the clothes on their back to keep them warm, come rain or shine, to raise awareness of rough sleepers

Gareth Davies, Managing Director at the Stadium along with other members of the KSDL team will hear stories from some of those people who have been previously supported by Simon on the Streets to better understand the reasoning behind why so many end up homeless and what problems they encounter on a daily basis.

By taking part in the rough sleep we will be able to support Simon on the Streets, who currently offer their service to approximately 100 service users across West Yorkshire, to make positive change for those who sleep rough.

Will you help us to reach our goal and aid Simon on the Streets reach more rough sleepers across the region? Your donation will have a dramatic impact on the life of a rough sleeper and will help them make the positive change they need to get them off the street!

It costs the charity a little over £2,000 per year to intensively support one rough sleeper, which is a considerably more economical option than many government funded services.  83p in every £1 of the charity’s income is spent on its charitable activity, directly going towards supporting its service users.

If you wish to sponsor us please follow the Just Giving link below. It’s so quick to do and could help change someone’s life for the better! 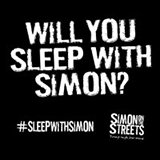