Kirklees to host England vs Ireland at the Galpharm Stadium, Huddersfield
– only guaranteed England match in West Yorkshire

Kirklees is today celebrating the news that England are to play Ireland at the Galpharm Stadium in Huddersfield in a Rugby League World Cup 2013 group game as tournament organisers revealed the full schedule of matches being held in October and November next year.
Rugby League World Cup 2013 have selected Kirklees to have Ireland as its adopted country in the approach to help make all the competing nations feel welcome in their host venues and build support for their team throughout the tournament.

Cllr Mehboob Khan, Leader of Kirklees Council, said, “This is fantastic news for Rugby League in Kirklees. We are delighted to be hosting this fixture which is the only guaranteed England match in West Yorkshire. It is fitting that England will play in Huddersfield, the birthplace of the Rugby League.”

“Our aim is to fill the Galpharm Stadium for this exciting world class fixture.  We want to encourage people not only from Kirklees but from all across Yorkshire and further afield to visit Huddersfield, see the England vs Ireland match and experience first hand the thrill of rugby league being played at the very highest level.”

“We now have a unique opportunity to stimulate even more interest in the game and over the next 18 months Kirklees Council, Huddersfield Giants, Batley Bulldogs and Dewsbury RAMS and their partners will work to further develop the sport to create a legacy from which we will see the sport continue to grow in the future.”

“It is an honour to have Ireland as our adopted country and I feel sure that the Irish community and many others in Kirklees will be delighted to support the Irish team throughout the tournament. As the draw sees England play Ireland spectators and fans will have the chance to support either of the home nations in what promises to be a thrilling encounter.”

The tournament could potentially see a number of players from our local teams involved in games, with Huddersfield Giants’ Eorl Crabtree, Danny Brough and Leroy Cudjoe all currently in the England training squad and Dale Ferguson, Shaun Lunt, Jermaine McGillvary Larne Patrick, Joe Wardle all named in the current England Knights training squad. Kevin Brown and Luke Robinson have also featured recently in England squads. Other familiar faces to fans of rugby league in Kirklees could include Liam Finn (a former player at Dewsbury RAMS and current Irish captain) and Gareth Moore from Batley Bulldogs (current Scottish International).

Nigel Wood, RLWC2103 Tournament Director said “This is an exciting day for all our hosts. They now know who will be playing or training in their stadiums and who their communities will be getting behind. We’re saying to them ‘this is your World Cup, this fantastic international event will be putting the world’s best Rugby League players right on your doorstep’. I have no doubt they will help to make this the best Rugby League World Cup so far”. 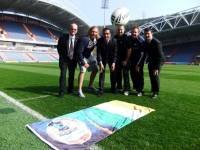