Tickets for the Rugby League World Cup 2013 go on sale from today –the day which marks one year to go until the start of this exciting international sporting event.
England will play Ireland at the John Smith’s Stadium in Huddersfield on Saturday 2 November 2013 in one of 28 games taking place in 21 stadia in the tournament which will see 14 nations compete for the title.

Tickets start from as little as £5 for children and £10 for adults with 55% of the tickets priced at £20 or less. There are some fantastic deals and ticket offers and people are advised to buy tickets early to avoid disappointment.

Get friends together and take advantage of some of the group deals, including 15% off if you buy over 15 tickets, 30% off for over 30 tickets and 50% off for more than 50 tickets. The group offers are for a limited time only so businesses, clubs or any other groups that wants a great day out need to act quickly.

The scrum package offers 10% off if you buy 6 tickets and a family ticket gives two adult tickets and one child ticket with a second child ticket free. There are also a range of hospitality packages on offer.

Cllr Mehboob Khan, leader of Kirklees Council, said,” We are now in the countdown to the start of the tournament and with tickets now on sale  supporters of the game can make sure they have the chance to see the only guaranteed England game in West Yorkshire at the John Smith’s Stadium.”

“Our aim is to fill the Stadium for this exciting world class fixture.  We want to encourage people not only from Kirklees but from all across Yorkshire and further afield to visit Huddersfield, see England play Ireland and experience first hand the thrill of rugby league being played at the very highest level.”

“Spectators and fans will have the chance to support either of the home nations in what promises to be a thrilling encounter. The game will be the culmination of the work to further develop rugby league across the district by the council and its partners to create a legacy from which we will see the sport continue to grow in the future.” 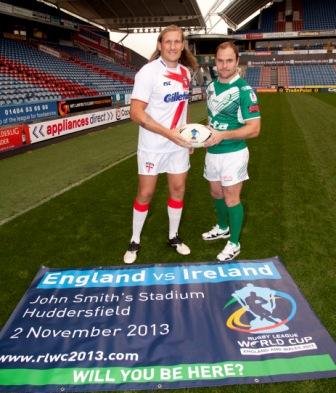