It has been announced that the England v New Zealand 4 Nation clash, which will take place here at the Stadium on the 29 October, has now sold out of general stand tickets! Hospitality packages are still available, with limited availability on our Bronze, Silver, Gold and Platinum packages!

This is the first game of the tournament to sell-out of general admission, with organisers being confident that hospitality will be close to follow!

Gareth Davies, Managing Director of The John Smith’s Stadium said “We at the Stadium are so proud of our role in making this match such a success.  We have worked hard over a long period with the RFL.  The result is a show piece national sporting event at our community Stadium that we are all proud of”.

Remaining hospitality packages can be purchased through Michaela Brook at 01484 484124 or michaela@ksdl.org.uk 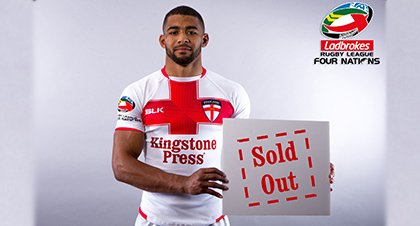