On Friday 7th December women from around Yorkshire came to The John Smith’s Stadium to enjoy The Ultimate Girl’s Night Out.

The Pamper Party, part of the stadium’s Christmas Party series saw guests, on arrival enjoy champagne cocktails and then be treated to a sumptuous 3 course Christmas dinner, served by ‘Buff Waiters’ who later in the night set themselves up as shot waiters.

Guests also indulged in a bit of retail therapy, with the hospitality boxes hosting a range of pop up shops. The night ended with a performance from Britain’s Got Talent drag act ‘Mama Trish’ followed by a DJ which saw guests dancing into the small hours.

Anthony Hegney, General Manager at Lindley Catering said: “At the stadium we hold a wide variety of events to suit everyone’s tastes. The pamper party was definitely a night for the girls, with the buff waiters and ‘Mama Trish’ being a particular highlight. With parting comments such as ‘when will the next one be?’ the night was a definite success!” 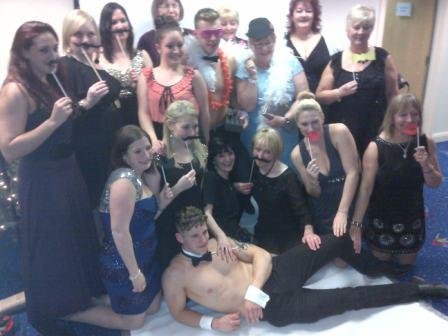