On 1st August HEINEKEN, the UK’s leading beer and cider business celebrated its one year anniversary of sponsoring The John Smith’s Stadium.

Since partnering with the stadium, HEINEKEN’s relationship with Huddersfield has gone from strength to strength. Most recently it has sponsored this year’s annual Huddersfield Food and Drink Festival, one of the largest free food festivals in the North.

To celebrate the beginning of the festival and its one year anniversary the stadium held a launch dinner on Yorkshire day in it’s newly refurbished Revell Ward Suite. The dinner was attended by many of the festivals exhibitors, along with HEINEKEN and friends of The John Smith’s Stadium as a double celebration of all things ‘Yorkshire!’

Guests were treated to food from around the world, prepared by Martin Russell, Head Chef at the stadium, which included a Caribbean station hosted by Discovery Bay’s Barrington Douglas, whilst entertainment came from Kirklees Music School’s string quartet. To mark its 1st birthday, Oliver Schofield of Sugar Craft Creations created a one-off John Smith’s themed birthday cake which was cut by Richard Sandland, Regional Sales Director of HEINKEN and Anthony Hegney, General Manager of the Lindley Group at The John Smith’s Stadium.

Anthony Hegney commented: “We were delighted to celebrate our 1st birthday as The John Smith’s Stadium and our partnership with HEINKEN. Throughout this year our relationship has continued to grow and has cemented our status as Huddersfield’s community stadium.

“We are delighted to be sponsorsing this year’s Food and Drink Festival, a celebration of regional flavours, with the very best tastes of Yorkshire on display by local chefs, brewers and producers. The Stadium has been part of Huddersfield’s community for almost 20 years and we wanted to show support for this prestigious event. Events like the Festival help to put Huddersfield firmly on the map as a key destination in Yorkshire.” 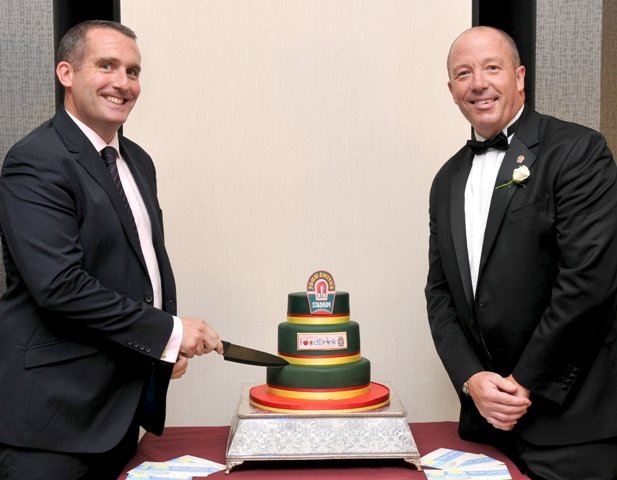