Kirklees Stadium Development Ltd (KSDL) has handed a five-year £10.3m contract to Lindley Venue Catering to provide all aspects of match-day and non match-day catering at the 51-acre complex.

Lindley Venue Catering, a division of The Lindley Group, was awarded the contract at The Galpharm Stadium after a very competitive tender.

Gareth Davies, managing director of KSDL, said: “The choice of Lindley Venue Catering is a key strategic decision for us.

“We want to achieve excellence in all that we do and in this regard, nothing is more important than the quality of the food and beverage and service that we offer to every single visitor to the stadium, matchday and non-matchday.”

“I have no doubt that together we’ll fine-tune separate football, rugby and non-matchday offerings that match the best of these.”

Adam Elliott, chief executive of The Lindley Group, said: “Having recently created Lindley Venue Catering as part of a strategic re-structure of our business, we’re thrilled to have been awarded the catering contract at The Galpharm Stadium.

“Whilst not only reinforcing our position as the leading sports stadia caterer and adding to our growing list of rugby club venues – the fact that the stadium hosts both sports is an added bonus.

“This leading-edge stadium provides us with an excellent opportunity to demonstrate Lindley’s capabilities in more general leisure venue catering.”

Mr Elliott said the company would be able to work with the stadium as a top concert venue, adding: “We’ll be introducing a very pro-active sales programme to maximise use of the venue for a variety of different events and occasions – from tribute band gigs and business exhibitions to Christmas parties and weddings.”

“On match-days we’ll be focusing on introducing more freshly cooked food, offering premium quality products, introducing a high street retail approach to the kiosks and making greater use of new technology both to communicate with match-goers and to enhance the service we provide to the Galpharm’s customers.”

On match days, Lindley Venue Catering will provide catering for more than 800 “covers”, 42 corporate hospitality suites and 16 retail kiosks at the ground.

The stadium complex also includes a business and conference centre, a 30-bay golf driving range and a 1,500sq ft golf superstore as well as a 2,000-seat nine screen cinema, a sports centre and bar and restaurant facilities. It also holds a civil wedding licence.

When football and rugby isn’t being played, the stadium can be converted to a concert arena accommodating up to 40,000 people. High profile rock and pop names to have played at the venue include Elton John, REM, The Eagles, Bon Jovi, Bryan Adams and Girls Aloud.

Lindley Catering Ltd, based at Stoke-on-Trent, was formed in 1968.

In 2006, the company acquired Heathcotes Outside, the specialist event catering operation set up by award-winning chefs Paul Heathcote and Gary Bates in 1997.

Every week, Lindley Group caters for 300,000 people from exclusive parties to serving 50,000 hungry fans in 15 minutes. It has annual turnover exceeding £50m and employs 500 full-time and 15,000 part-time employees. 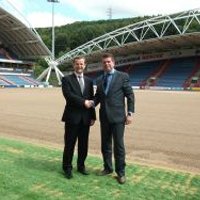