Huddersfield Giants are again offering supporters the opportunity to watch every First Utility Super League home game during 2016 from just £120.

2016 Season Tickets are available in the Fantastic Media Lower Tier for the incredible price of £120 for adults, £95 for over 65s and £60 for under 23s. This works out at just £8.57  a game for adults to watch the Giants behind the sticks throughout 2016 (based on 14 home games, with the 15th game free exclusively to our Season Ticket holders should we again host one), a huge saving on game-by-game pricing. This fantastic deal is only available until the Early Bird Deadline of Monday 30th November at 5pm.

Prices on all standard Season Ticket packages have been frozen for the 2016 campaign and Claret and Gold supporters can watch the Giants in the side-on stands for the Early Bird price of just £235. Prices in the Revell Ward Stand and LV= Britannia Rescue Stand are £235 for adults, £180 for Over 65s and just £115 for Under 23s.

2015 Season Ticket holders are reminded they have until the Seat Renewal Deadline of Saturday 31st October at 12 midday to renew their reserved seat before they are released for general sale. 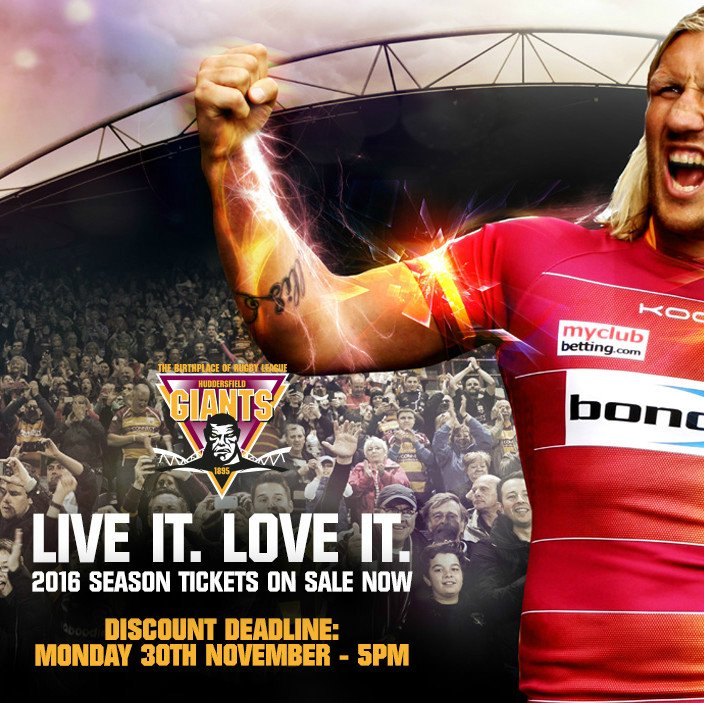