On Friday 26th June Environmental Alliance Ltd met with some of the biggest companies across Kirklees and Colne Valley to reveal its exciting new proposal for a Greenstreams Community Linear Park running along the River Colne. The proposal aims to make the riverside more accessible and set it at the heart of the community.

Running all the way from Cooper Bridge to Milnsbridge, the park will act as a recreational site creating better facilities for cycling, angling, walking, canoeing and picnicking.

At the proposal attendees heard from current supporters of the project; Huddersfield MP and scheme patron Barry Sheerman, Jason McCartney Colne Valley MP, Cummins, LV=Britannia Rescue and our very own Managing Director Gareth Davies. The supporters discussed what actions they have put in place to help improve the river side, including regular litter picks, management of pathways, reporting of fly-tipping and installations of flowers and bat boxes.

Gareth Davies, Managing Director of the Stadium, discussed the future of the river bank, focusing on the coming developments planned at the Stadium with The HD One project. He discussed his vision for the project and how he saw the River Colne at the heart of it, improving user access and experience.

The meeting ended with Kirklees Stadium Development Ltd being the first to pledge sponsorship to the Linear Park project. The scheme, which will cover 5 miles, is budgeted at between £25,000 and £30,000.

The rivers in Kirklees have been a wasted asset for decades and the Greenstreams Project is dedicated to changing that for the benefit of both people and wildlife. Over the years Greenstreams has created and improved over 6 km of public access to the river and riverside green spaces around Huddersfield so that the value of these ‘hidden gems’ may be appreciated by all. Alongside this, the river is now becoming increasingly recognised for recreation with a canoe launch facility and anglers coming from far and wide to fish for grayling and native brown trout. 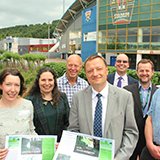