Christmas Day for those less fortunate thanks to goodwill of volunteers

Christmas Day for those less fortunate thanks to goodwill of volunteers

People who had been facing Christmas Day on the streets, alone at home or without festive food and presents tucked into a three-course lunch, supplied by generous volunteers and businesses.

More than 100 homeless, isolated and hard-hit Huddersfield folk had a Christmas Day to remember – rather than forget – at the John Smith’s Stadium.People who had been facing Christmas Day on the streets, alone at home or without festive food and presents tucked into a three-course lunch, supplied by generous volunteers and businesses.

The event had taken place at Lord Street Methodist Mission for 25 years, providing a bit of Christmas cheer for up to 30 people in crisis. But when the Mission was unable to put on the lunch this year Anthony Hegney, catering general manager at John Smith’s Stadium, stepped in.Mr Hegney said: “On previous Christmases all I did was overindulge so I thought I should do something else rather than that”.Anthony, from Castle Hill, rallied together local businesses to supply food and gifts as well as 80 volunteers to help serve and keep the guests happy.Among the biggest donors, who provided everything from meats to toiletries, were Morrisons, Huddersfield Police Station, Code Blue publicity and Greedy Little Pig which supplied a bounty of roast pork.Guests were also given gifts, clothes and packs of essentials to take away.Sgt Zaheer Abbas, one of the volunteers from Huddersfield Police, said: “The day hopefully helped spread the Christmas cheer to those who are less fortunate.“It was about making each and every individual feel special and to engage with those who may otherwise come in contact with the police or other partner agencies.

“The dedication and commitment shown by everyone to help this come to fruition is testament to the kind natured and caring people in Kirklees.”Mr Hegney, who runs Centerplate UK catering, said: “There are a lot of homeless people or people who are on their own at Christmas.“There are a lot of people below the breadline who can’t provide for their families on Christmas Day.“The Methodist Mission has done it for 25 years but it wasn’t available this year so we worked with some of the Methodist Mission’s service users and got them in the stadium.“The volunteers have been brilliant. We had 300 to 400 people asking to volunteer. We’ve also had a massive response from local businesses.”But Mr Hegney pointed out that crises such as homelessness and isolation aren’t confined to the festive season.He said: “People should remember that people need things throughout the year, not just at Christmas.” 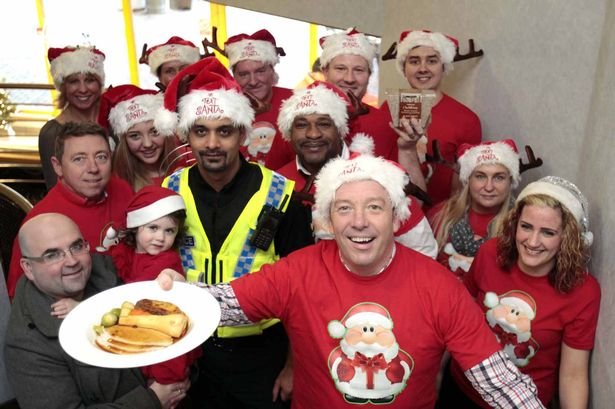