It was a world apart from their day-to-day life.

Ten children affected by the world’s worst nuclear disaster at Chernobyl enjoyed a tour around the soon-to-be John Smith’s Stadium.

As part of an annual charity programme, the group aged between eight and 10 are spending four weeks touring England.

On April 26, 1986, a reactor at the Chernobyl plant in Ukraine ruptured and a series of explosions caused large quantities of radioactive contamination to be released in to the atmosphere.

Radiation spread over much of Western USSR and Europe and as it went into both the air and the water system it is still having an affect on residents.

It is thought that the after-effects of the disaster will be seen for another 100 years.

After Colne Valley Lion John and Sharon Topham met organisers from Friends of Chernobyl, Denise and David Bennet while on holiday in Cyprus, they decided they wanted to help get involved and show the children Huddersfield.

John, who also works as a Deput Safety Officer at the Stadium said: “It was a great day. We took them all around the stadium and then later we went on to the Cannon Hall Farm.

“They were absolutely in awe of the stadium.

“The Lions also awarded them with medals from our recent Marsden 10-miler.

“They truly went home happy and we were so keen to give them a good time.

“It was really quite moving as the children are suffering with Chernobyl disease.

“The children are being fostered by different families for the month. They arrive here with nothing.

“The foster families take them shopping and get them some new clothes and they leave with an abundance of things to take back to their hometowns.”

John, of Golcar, added: “As Lions we get behind projects we feel passionate about. “We certainly felt this was something we could help with.

“The president makes the final decision but based on the success of this trip, we really do hope that we can be a part of it again next year.”

Chernobyl was the world’s worst nuclear accident and was caused by human error.

Workers had switched off important control systems at the Ukrainian plant’s reactor number four and allowed it to reach unstable, low-power conditions, according to a United Nations report.

A power surge led to a series of blasts, at 1.24am on April 26, 1986, which blew off the reactor’s heavy steel and concrete lid and sent a cloud of radioactive dust billowing across northern and western Europe, reaching as far as the eastern United States.

The Chernobyl Forum, a group of eight United Nations agencies, and the governments of Ukraine, Belarus and Russia, have estimated the death toll at only a few thousand as a result of the explosion, but UN agencies have said some 4,000 people will die in total because of radiation exposure. 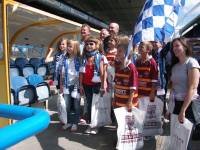