To celebrate 50 days to go until their first game in the Four Nations, England Rugby League have launched the new kit they will be playing in when they take on some of the best teams in the world, starting with New Zealand at The John Smith’s Stadium on Saturday, October 29 (2.30pm).

Designed and produced by BLK, the shirt features new sponsor Kingstone Press Cider and the St George’s Cross can now be seen proudly on each player’s chest as they look to create the ‘Wall of White’ that helped them to an International Series win in 2015.

One of the first players to get their hands on the new kit was England and South Sydney Rabbitohs forward Sam Burgess.

“I remember the first time I pulled on an international jersey. It was back in 2007 against the Kiwis in Huddersfield and I was over the moon with it because I got to play with two of my heroes that day – Jamie Peacock and Adrian Morley,” said Burgess.

“It was a great way to start my international career with some great people around me who made it super enjoyable.

“It’s a proud moment when you pull on that England shirt, there’ll be plenty of guys keen to get this new shirt on come October.”

During the Four Nations, England will also be in action against World Cup holders Australia on home soil for the first time since 2013 and tournament newcomers Scotland, who will be led by their playmaker Danny Brough. Anfield, one of the most iconic stadiums in world sport, will host the final.

The last time Burgess was seen in an England Rugby League shirt was three years ago at Wembley Stadium in the Rugby League World Cup semi-final against New Zealand. Appearing on the international stage is something he has wanted from an early age.

“It’s special to represent your country, as a kid I used to go and watch England and Great Britain play. My grandma took me to see a lot of the games,” said the 27-year-old.

“Growing up I always wanted to represent my country. I’ll never forget the times I missed playing for England and I was just a spectator – it was hard. It makes me appreciate every moment I get to wear an England shirt and be part of the team.

“One of my favourite parts is singing the national anthem with my team-mates and brothers, it’s pretty special. It’s always good coming home to hear the English fans, they’re a cracking bunch who no doubt will be right behind us during the Four Nations this autumn.”

Ben Houchen, chief executive of BLK United Kingdom, said: “We are delighted to continue in partnership with England Rugby League and the RFL to supply their shirts and training kit.

“BLK is one of the fastest growing sportswear brands in the world and we wish the England team the best of luck in the Four Nations and cannot wait to share the new shirt with the fans.”

The new BLK England 2016 Four Nations kit is now available in a range of sizes from rugbyleagueonline.co.uk

More than 50 per cent of tickets for the Four Nations are priced at £25 or less. Go to rugby-league.com/tickets/fournations or call the Rugby League Ticket Hotline on 0844 856 1113 (calls to this number will cost 7p per minute plus your phone company’s access charge.) 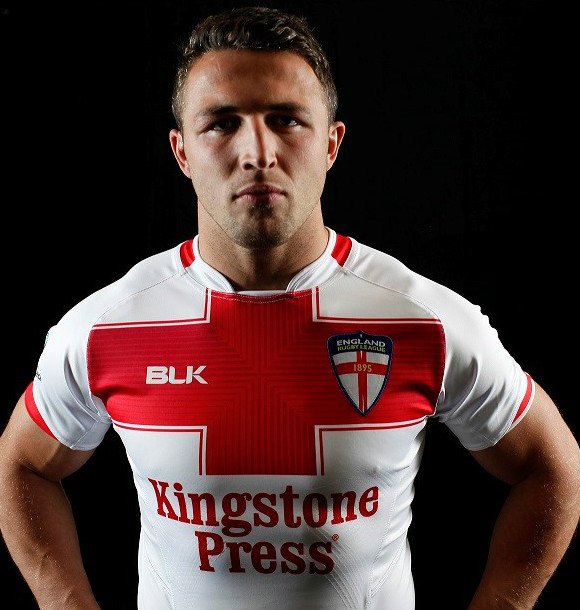